Before we talk about our expectations for changes in ZEW Survey – for German economic sentiment, it is important to start with the latest reading of the German Manufacturing PMI, because of the usual correlation read for the two indicators as both indicators represent the economic outlook for the largest economies in the eurozone. 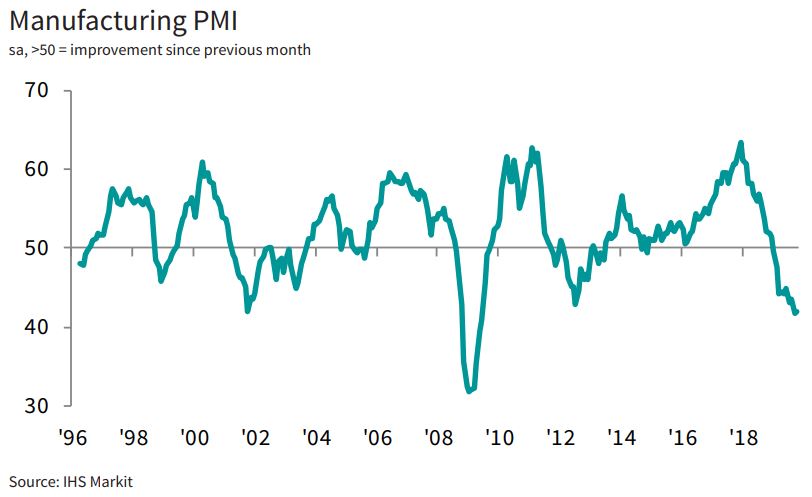 This revise generally gives the market a positive tune, although the latest reading still indicates ten consecutive months of contraction in German Factories since the beginning of 2019, details of the PMI survey indicate that production has fallen at a slower pace coupled with a decline in new orders for the 13th consecutive month, albeit at a slower pace. It is noticeable as well, The rate of employment decline in the sector accelerated to its fastest pace since January 2010, mostly due to a decrease in the number of temporary workers as per IHS Markit reported.

At the same time, the survey shows the sharp decline in the prices of industrial inputs such as steel and plastic in the form of the fastest decline since 2016, which was translated into a clear decrease in the cost of production for the fourth consecutive month and the largest rate since November 2009.

Based on this slight improvement in the reading of the index, we can expect this improvement to continue during the remaining few months of this year, benefiting from the overall improvement in risk appetite.

Returning to Germany’s ZEW economic sentiment index, which recorded a slight drop of 0.3 points in October 2019, now stands at -22.8 points, this keeps the index well below its long-term average of 21.4 points. This clearly confirms all the data from the PMI survey mentioned above, however, some positive expectations regarding trade tensions have emerged recently, which may affect the expectations of experts for the German economy in the reading of the index for the month of November, taking into account the recent stimulus from the ECB, which may bring a slight improvement in inflation expectations to the end of the year, So, I expect the November reading to be better than the previous reading for October. 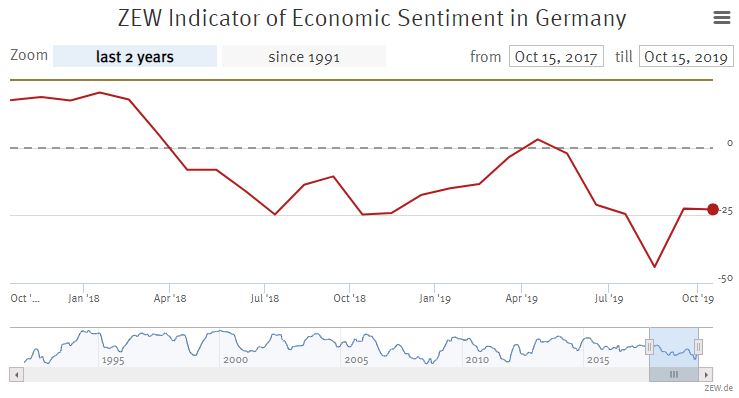 For those who do not know:

Germany’s ZEW Economic Sentiment survey measures analysts’ optimism about the expected economic developments over the next six months. The survey covers up to 350 financial and economic analysts. The indicator is designed to represent the difference between the percentage of optimistic analysts and the percentage of analysts who are pessimistic about the development of the economy. Therefore, the ZEW confidence indicator appears on a scale from -100, which is mean all analysts expect the economy to deteriorate- to 100, which says all analysts expect the economy to improve. Therefore, logically, a value of 0 indicates that the number of optimistic analysts equals the number of pessimistic analysts.

The post ZEW survey maybe it will be a piece of good news for the largest economy in EZ appeared first on LeapRate.

ZEW survey maybe it will be a piece of good news for the largest economy in EZ was first posted on November 6, 2019 at 11:35 am.

To His Own Surprise, Crypto Volume Pumper’s Business Is Still Thriving – CoinDesk

Canada’s Largest Cryptocurrency Exchange Found to Have Operated Like a Ponzi...

To His Own Surprise, Crypto Volume Pumper’s Business Is Still Thriving...